The Millennium Mosque of Beijing 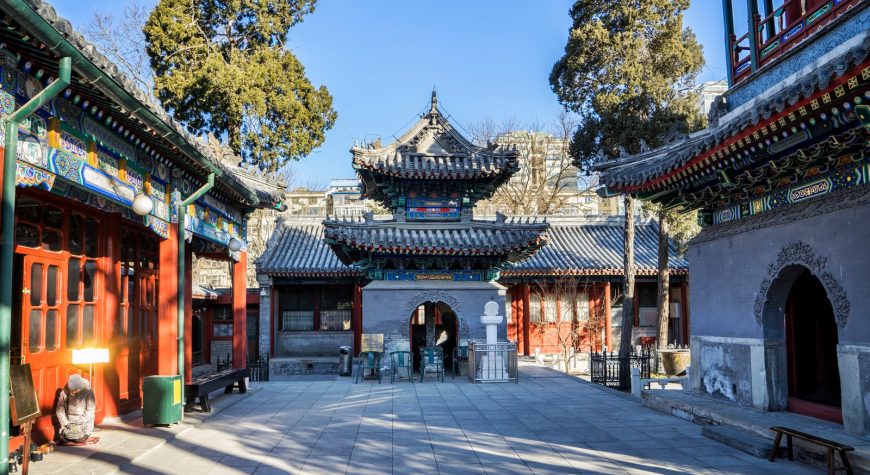 The Nujie Mosque, the largest and oldest mosque in Beijing, was founded in 996 in the southwestern Xuanwu district, which had long been inhabited by Chinese Muslims. The mosque took on its present form under the Kangxi Emperor in the early 18th century. Behind the traditional Chinese architecture are rooms arranged according to Islamic traditions.

From the side, the Nujie Mosque is a typical example of the best traditions of Chinese architecture with its intricate cornices and tiles. On the facade, under the eaves hang two inscriptions in golden characters on a blue background on top of each other. The taller one reads the name of the mosque, while the lower inscription reads “good way to heaven. There is an inconspicuous path leading to the entrance on the right side of the building.

On the left is the courtyard, quiet and immaculately clean. On the right is the “moon observation tower” – it is higher than the neighboring roofs and is used to watch the moon in the run-up to Ramadan. On the other side opens the main prayer hall, where on weekdays older men gather for namaz. In terms of area, Nujie is smaller than the beautiful “Great Mosque of the East” in Xiang, the capital of the Tang Dynasty (its area is 12 thousand square meters), however, Nujie is also quite roomy and can accommodate several hundred people simultaneously.

The interior of the mosque is a mix of styles, quite harmonious. The decoration is carvings and paintings. The mihrab dates back to the XIV-XV centuries, to the period of the Ming dynasty; at first sight it looks absolutely Chinese, with flowers and swirls, but after a closer look we see that it is only a background for the traditional texts written in the script, clearly formed under the influence of local writing.

The small building with the stone tablets commemorating the founding of the mosque and its several restorations, particularly in 1442 and in 1692 under the Kangxi emperor, also look Chinese. One plaque reads, “Tell the provinces of the country that the ruler will execute anyone who spreads lies about Muslims, and bring me a report.” The story goes that when the imperial detectives brought him news that the Muslim community was planning an uprising under the guise of a meeting on the occasion of a major holiday, he personally went to the mosque and, convinced that it was a plot, made the statement carved on the plaque.

The minaret of the Nujie Mosque is square and low, clearly built so that the azan can be heard by Muslims living in the immediate vicinity of the mosque, no further away. Naturally, the mosque faces the qibla, that is, it faces west. To the east is an inner garden with cypress trees and the tomb of the mosque’s founder, believed to be the Arab scholar Nasruddin, and the tombs of two sheikhs from Central Asia and Persia who visited Beijing in the 13th century, probably having arrived here on the Great Silk Road at about the same time as Marco Polo. The inscriptions on the graves are carved in the same unusual Chinese type of Arabic script, tuluth.

In 1997, the millennial anniversary of this architectural monument was officially celebrated.