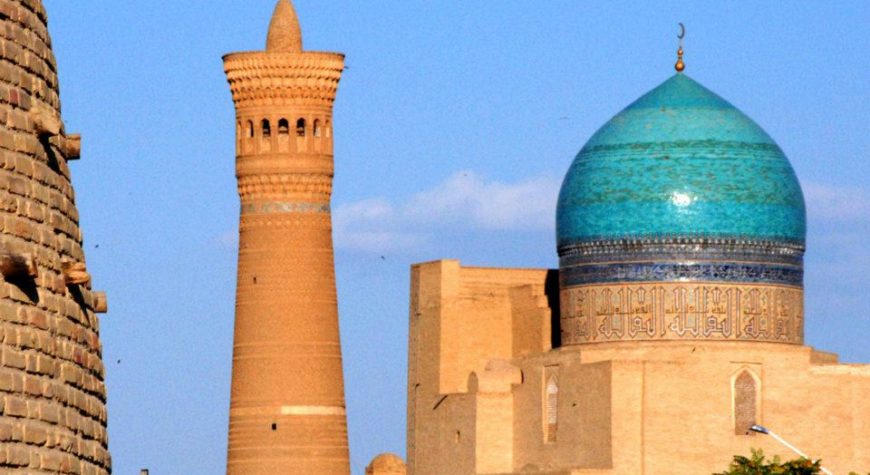 The panorama of medieval and modern Bukhara is dominated by a tall (45.5 m) brick tower of graceful outlines, called “great” in ancient times. This is how the word “kalyan” is translated from the Parthian language, which disappeared almost two thousand years ago, into the language of Bukhara inhabitants. According to Muhammad Narshakhi in his “History of Bukhara”, the high minaret for the cathedral mosque was built during the Samanid dynasty in the early 10th century. But for some reason it did not satisfy the ambitions of the new rulers of Bukhara, the Karakhanid Ilek-Khans. That is when Arslan-khan of the Karakhanid dynasty ordered a certain master named Bako to erect a really great minaret in the center of his capital, which would serve not only to convene the faithful for the obligatory Friday prayers, “peshin”, but also to become a watchtower. Master Bako at the second attempt in 1127 managed to create architectural composition which has served as a sample for the subsequent builders of similar structures in Bukhara oasis.

The minaret has many meters foundation; its diameter at the bottom is nine meters, at the top it is six meters. From the roof of the mosque located nearby by a small bridge one can pass inside the minaret where the spiral staircase with 104 steps is built, leading to the platform of the lantern. Earlier the top link of the lantern looked differently and accordingly the minaret was higher, now there is a shapeless superstructure. The upper part of the structure was restored, especially after the shelling of Bukhara in 1920. But the decor of the XII century has been preserved – there are twelve belts of geometric ornament made of bricks, in which the inscriptions in the handwriting “flowering kufi” are woven. A mosque adjacent to the minaret was built at the same time, but it was destroyed by Genghis Khan’s troops in 1220 after storming the city, as were most of Bukhara’s buildings. According to the legend, the Mughal leader liked the minaret of Kalyan for its majesty and this saved it from destruction by the invaders.

Photos from the SMI-ASIA and Marakanda Expedition archives.