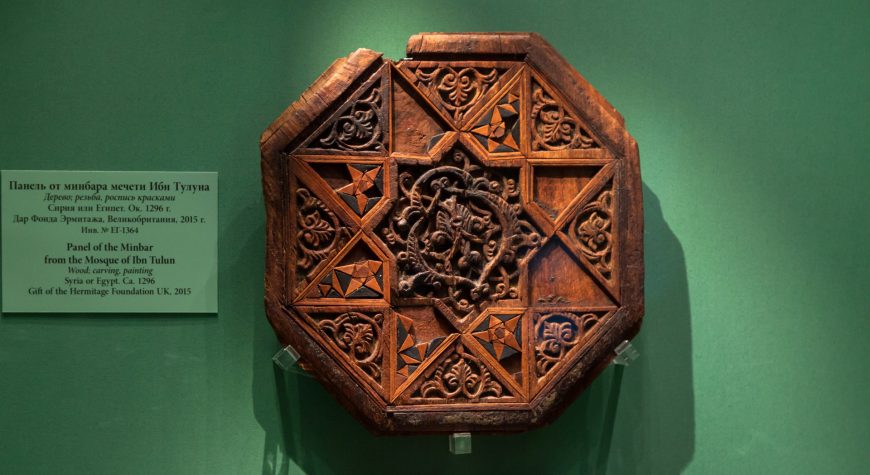 On February 14, 2017, the day of readings dedicated to the memory of Academician B.B. Piotrovsky, the State Hermitage opened a renewed permanent exhibition “Art of the Islamic Middle East. The Mameluk Sultanate.

Three halls on the third floor of the Winter Palace (Nos 385-387) display art and cultural monuments from the Middle East of the 13th-15th centuries: the Mameluk Sultanate, a state that emerged in the mid-13th century on the vast territory of Egypt, Syria and also part of the Arabian Peninsula with the holy cities of Mecca and Medina, and the Emirate of Granada, the last Muslim state in the south of the Iberian Peninsula.

“This is the Hermitage style of showing oriental art,” noted Mikhail Borisovich, “The remarkable pieces are the result of the Hermitage’s collecting efforts over many years. This exhibition is followed by a ‘draft’ of a grandiose exhibition which will go on – the Iranian collection and the Ottoman, Turkish part. The permanent exhibition of the Oriental Division is an example of how we are beginning to master the third floor of the Winter Palace in the Hermitage manner. Many rooms on the third floor have been vacated because we have created an exhibition in the General Staff Building, and now the Winter Palace exhibition is gradually taking on a new form.

From 1250 to 1517 the Mameluk sultanate played a leading role in the political, economic and cultural life of the Middle East.

The Mamelukes (from Arabic “mameluke” – belonging to [someone], a slave) were the slaves of sultans and emirs, who were trained in military affairs and became personal guards. The tradition of using slaves as professional military officers existed in many Muslim countries for centuries (many of them subsequently achieved higher positions not only in the army, but also in administrative positions and often staged palace coups).

Power in the Mamluk Sultanate was transferred by right of force, despite numerous attempts by the rulers to pass it on to their heirs. Two periods and two conditional Mamluk dynasties are distinguished: Bahri – mostly Turks from the southern Russian steppes (1250-1382, 1389-1390); and Burji – Circassians from the Caucasus (1382-1389, 1390-1517). The name Bahri comes from the corps of Bahriya on the Nile (from Arabic “bahr” – river), and Burji from the corps located in the tower of the Cairo Citadel (from Arabic “burj” – tower).

The heyday of art and culture was during the reign of Sultan Muhammad ibn Kalaun. At that time (1293-1341) numerous mosques and madrasahs were built; skilfully decorated manuscripts and utensils were created which sometimes bore the name of the customer and his “coat of arms”. The finest works of applied art in the Hermitage collection, executed in bronze and richly inlaid with silver and gold, date back to the reign of the Mameluk sultan. No less valuable are the linen and silk fabrics, lamps with gilding and painted with colored enamels which decorated the interiors of mosques and madrassahs, public buildings and private houses, set wood panels with inlays of ivory.

Since the end of XIV century the arts and crafts have been gradually declining and tinned copper is more often used instead of bronze, items of which are also in the museum collection. The second prosperity is in the second half of the XV century, under the Sultan Kaitbay (1468-1496). But in 1516 begins a war between the Mamelukes and the Ottoman Empire under the leadership of Selim I (1514-1520), which ends with the execution of the last Mameluk Sultan Tuman-bay II and the inclusion of Syria, Egypt and Hijaz into the Ottoman state.

The items in the museum’s collection also demonstrate the special importance given to the images of various emblems and signs of emirs and sultans on things. The rudiments of heraldry date back to the Ayyubids, the early Mameluk sultans used symbols of power adopted from the Seljuks of Rum, the Byzantines and the Crusaders, such as the lion (leopard), the eagle, the lily or the crescent moon. Apart from the sultans, only emirs used signs. The signs were based on the symbols of the ceremonial departments in which they served. The most common were: bowl (cup (cupbearer); saber or dagger (squire), pencil case (secretary), handkerchief (keeper of the palace closet), clubs (polo master). Under the Burgi sultans the signs became more complex when they included several elements, the main ones being: a bowl, a handkerchief, a pencil case, and a powder pistol.

At the beginning of the 14th century, epigraphic cartouches appeared: round shields divided into three fields, where initially in the central and later in all three there was an inscription praising the Sultan.

Since the Mamluk heraldry never came to that developed system of codification and heredity as in Europe, the shape of the shield, its color and the color of the elements, although different, but rather would.

Timche of the Kashan Bazaar...