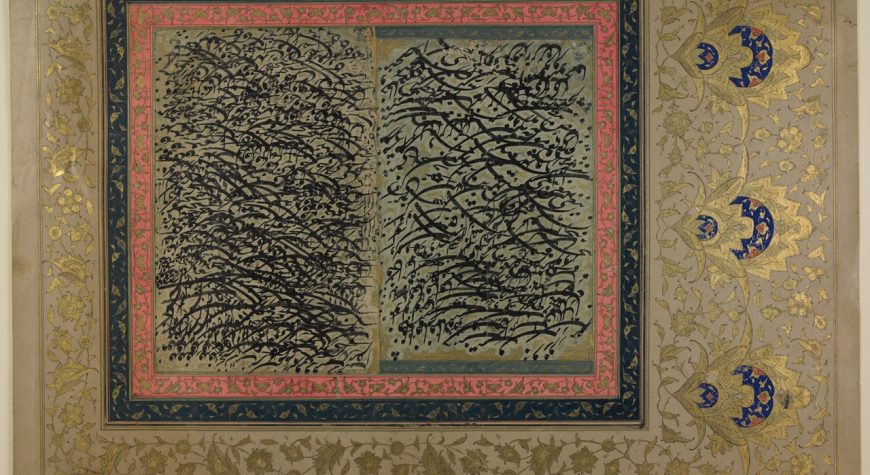 In preference to the more broken nasta’liq script, the traditional Persian manuscript nasta’liq is used here. The Library of Congress keeps another such leaf, which bears a striking resemblance to this fragment, decorated with a blue border and pasted to a light pink paper decorated with gold fleur-de-lis and flowers.

Apparently both pieces were part of the same album (murakka) with calligraphic specimens that belonged to a patron of the arts, whose seal (unfortunately, illegible) appears on a number of calligraphic works. Such sheets, called siyah mashq (literally “black practice”) in Persian, were used for practicing calligraphy and, in order to save paper, were completely covered with the text.

Over time they became collectors’ items and were signed and dated (although this fragment bears neither signature nor date). Many fragments, such as this one, were framed in a variety of decorative frames and pasted to sheets with ornaments in the form of plants and flowers painted in gold paint.

As an established genre, calligraphy exercise sheets were filled out according to certain rules of formal composition, largely based on rhythm and repetition. Although extant specimens of siyah mashq calligraphy sheets date to the early 17th century, it appears that they became an especially popular genre in the second half of the 19th century, during the visual arts revival that began with the Qatari ruler Nasir ad-Din Shah, the former Shah of Iran from 1848 to 1896.