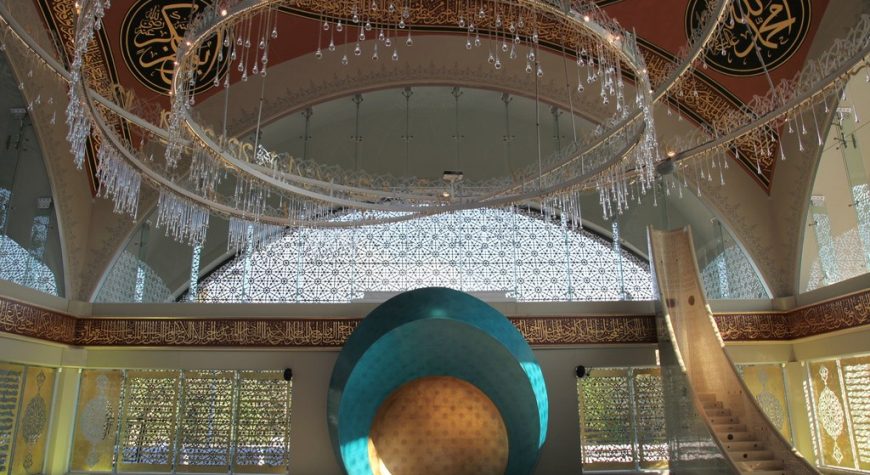 There are so many ancient mosques in Istanbul that such religious structures created recently can hardly be regarded as city landmarks. However, there are pleasant exceptions.

In May 2009, a new Şakirin mosque (Şakirin Camii) was opened for the faithful in one of the most religious districts of Istanbul, Yuskudar, near the entrance to the largest cemetery in the city. It was donated by a Turkish-Arab family living permanently in London. This is how the memory of Ibrahim and Semih Shakir was commemorated by their three children (Gazi, Hasan, and Hada). The construction of the religious complex, with a total area of about 10,000 square meters, lasted four and a half years.

Two minarets rose to a height of 35 m, the dome of the structure, 39.6 m in diameter, was made of a composite aluminum alloy, and the usually wooden minbar was made of a composite acrylic material. The turquoise niche of the mihrab, facing Mecca, resembles a seashell. The chandelier, made of plexiglass, metal, mirrors and glass, bears the 99 names of Allah. The prayer hall can seat 500 people.

Although the Shakirin Mosque retains elements of classical Turkish architecture, it is called the most modern mosque in Turkey.

After all, a team of talented masters in their fields worked on the project, from the architectural plan, to details such as interior decoration, decoration, calligraphy, stained glass, lighting, etc.

Among the authors of the project is the architect Hüsrev Tayla, one of whose most monumental works was the Kocatepe Mosque (1987) in Kızılay, Ankara. But the most interesting thing is that the interior of the Shakirin Mosque was designed by a woman, Zeynep Fadıllıoğlu.

Until recently she was mostly known for decorating nightclubs, restaurants and private homes in Istanbul, for which she received the Andrew Martin International Interior Design Review Award. It is worth noting that, for example, The Times magazine calls this award “the Oscar in the world of interior design”.

A distinctive feature of the avant-garde interior of the Shakirin mosque was the abundance of glass – this material is used on three sides of the mosque walls. The plan of the Shakirin Mosque provides for a small museum to display Islamic art objects.

Among them may be one of the main Muslim relics – a special blanket (kiswa) with embroidered in gold sayings from the Koran, which annually cover the Kaaba in Mecca. The Shakir family bought the relic at a Sotheby’s auction in London for almost a million dollars. The total value of the Shakirin mosque itself, which combines tradition with modernity, was not disclosed.