Page from the Blue Koran 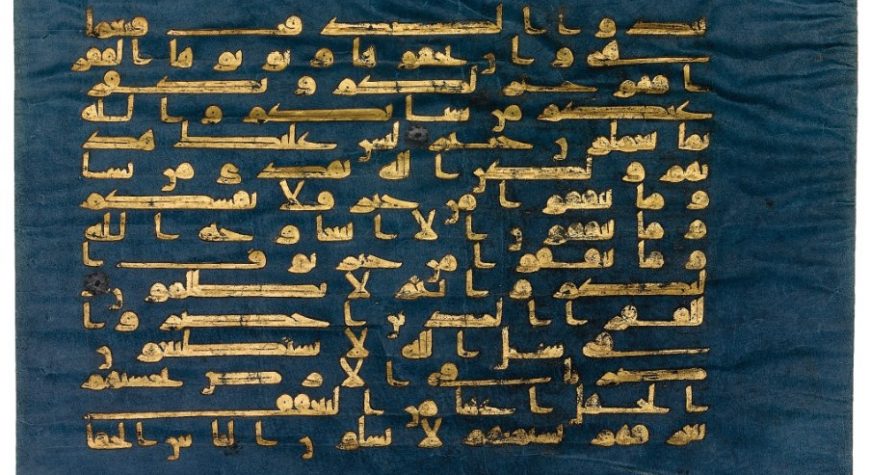 This leaf is from an exceptional manuscript commonly known as the Blue Qur’an. When completed, it was to become one of the most skillful manuscripts created during the early medieval period in the Islamic world. Other examples of dyed parchment are known but rare, and yellow was the more usual color choice. Blue was most likely used symbolically, and it is likely that blue parchment combined with gold script must have rivaled the finest manuscripts of the Byzantine Empire, which were colored blue and purple (see Fraser, M. and W. Kwiatkowski, Chkernila and Gold. Islamic Calligraphy, London – Berlin, 2006, no. 46).

The exact origin of the Blue Qur’an is unknown, but several theories have been advanced over the last century, F.R. Martin, who acquired some of the pages in Istanbul in 1912, has suggested that the manuscript was commissioned by the Abbasid caliph al-Mamun for his father Harun al-Rashid’s tomb, and that the dark blue of the parchment was a symbol of mourning. However, based on an inventory of the Great Mosque in Qayrawan in 1294 (published in 1956 by Chabbouh) which mentions a Koran written in gold on blue parchment, J. M. Bloom argues that a North African origin is the most likely (Bloom, J. M., ‘Al-Ma’mun’s Blue Koran?’, Revue des études islamiques, LIV, 1986, pp.59-65; and ‘The Blue Koran. An Early Fatimid Kufic manuscript from the Maghrib’, Les manuscrits du Moyen-Orient, Varia Turcica, VIII, Istanbul and Paris, 1989, pp.95-99).

More recent studies by T. Stanley (Quaritch 1999, pp.7-15) point to an Andalusian patron, M. Fraser suggests an origin in the province of the Aglabids or Calbites of Sicily (op. cit., 2006, p.46). Alain George’s recent detailed and careful study of the manuscript attributes the manuscript to the early Abbasid period in the late eighth or early ninth century (George, A., ‘Calligraphy, Colour and Light in the Blue Qur’an’, in Journal of Qur’anic Studies, Volume XI, Issue 1, 2009, pp.75-125).

Even if the exact origin of the manuscript remains unknown, it is universally accepted that this Qur’an is a strikingly luxurious example of early Islamic manuscript-making, whose patron must have been a ruler of great wealth and ambition, and that this manuscript was one of the most important in the medieval Arab world.