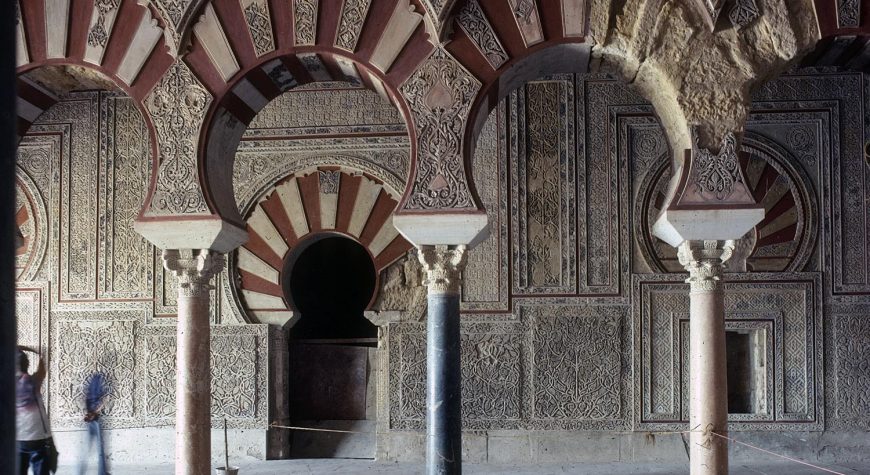 Madina al-Zahra (Arabic for “City of Lights”) is a palatial city 8 km west of Cordoba. One of the most outstanding monuments of the Al-Andalus state was built in the 10th century by order of the caliph Abd al-Rahman III of the Umayyad dynasty.

Madinah az-Zahra was built on a hill and its buildings were arranged on three terraces. On the upper terrace was the palace of ‘Abd al-Rahman III, supposedly one of the first to be built. Next to it were the governmental buildings and the reception rooms. Below, beautiful gardens were laid out in front of the palace, and on the lower terrace there were residential houses and a mosque.

Among the excavations, the most preserved are the House of the Viziers and the Hall of Riches in carved marble. The Hall of Riches was built between 953 and 957. Next to the Wealth Hall is the High Garden. In the eastern part of the High Garden in the 10th century there was a covered passageway which allowed the Caliph to enter the mosque. There are various speculations about the purpose of the House of the Viziers. For a long time, primarily because of its size, it was called the “Army House”. However, today it is considered that the building was used by the ruling circles of the caliphate.

Little remains of the Alham Mosque on the lower terrace. It is known that it had a rectangular foundation. The main decorations of the mosque were on the entrance doors. Near the main entrance to the mosque was a room which probably served to collect alms (saadaka).

The entire city of Madinah az-Zahra was protected by a strong wall, of which the central aisle of the northern part of the wall has now been excavated. In this part of the wall there is a gate which in ancient times connected Medina with Cordoba.