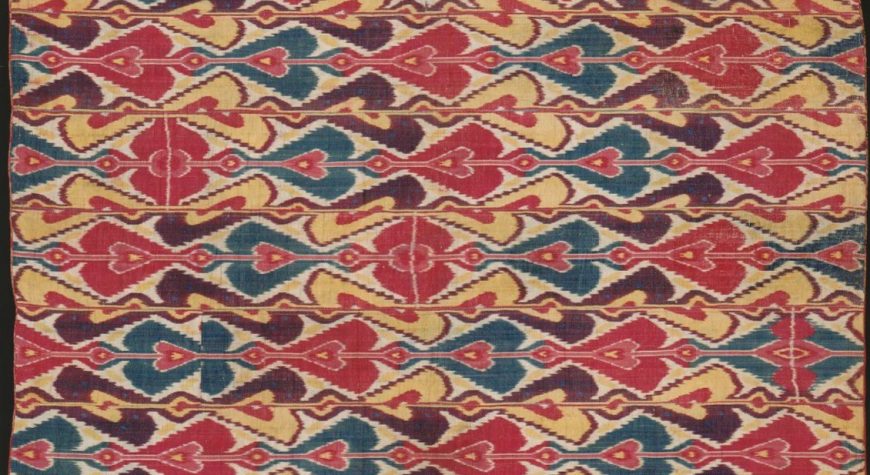 Ikat is the most difficult, carried out exclusively by hand weaving technique, consists in reservation, i.e. tying bundles of threads for the purpose of their gradual dyeing in certain colors. Uzbek ikat is different in that the pattern is applied only on the warp threads, and the weft remains monochrome.

The fabrics made in the ikat technique are ornamented using the same technique of tying the warp or woven in one colour, in small stripes or checks, and sometimes in such a way that the basis is made from yarns of one color and the weft from another, which gives the fabric a beautiful and complex color cast.

In ancient times Uzbek silk was highly valued and considered a luxury, but progress has pushed aside hand weaving, and for a long time the technique has languished in oblivion, but over the last decade a number of designers have cited Uzbek silk in clothing, accessories and furnishings, and in some places used it as the basic material. Thus, ikat has regained its status and value in a modern reading.

Designer Oscar De La Renta twice used ykat as a leitmotif in his collections in 2005 and 2008. At Balenciaga fall 2007 some models wore silk ikat dresses. The bright Uzbek silk appeared in the collections of Dries Van Noten S/S 2010 and Gucci of the same season. Dresses with prints a la “ikat” met in the collections of L.A.M.B. Spring 2011 , Naeem Khan Fall 2011 , Farah Angsana Spring 2011 and Proenza Schouler pre fall 2011.