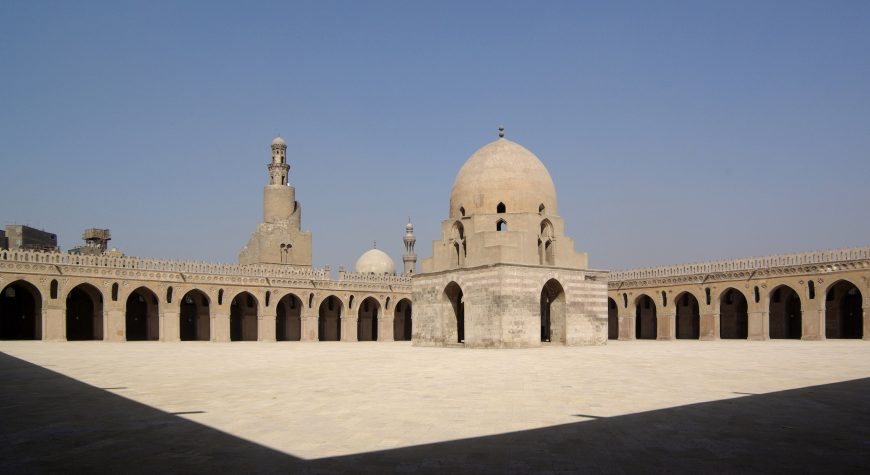 The Ibn Tulun Mosque is located in Cairo, the capital of Egypt. It is probably the oldest mosque in Fustat, preserving its original appearance dating back to the mid 9th century.

The mosque was built by the Abbasid viceroy in Egypt, Ahmed ibn Tulun (868-884), who was effectively independent of the central government. The historian al-Maqrizi dates the beginning of the construction of the mosque to 876,[1] and on a slab preserved from that time in the mosque the date of completion is given as 265 A.H., or 879 A.D.

The mosque was built on a small hill called Jabal Yashkur (“Thanksgiving Hill”). One local legend says that Noah’s ark stopped here, not on Mount Ararat, after the Flood.

The Great Ceremonial Mosque was supposed to be the centerpiece of Ibn Tulun al-Katai’s capital, serving as the administrative center of the Tulunid dynasty. The mosque originally adjoined Ibn Tulun’s palace and the door adjacent to the minbar allowed him to enter directly into the mosque. Al-Qatai was destroyed in the early 10th century and the mosque is the only surviving structure from that time.

For a long period from the end of the 10th century to the first half of the 2nd millennium the mosque of Ibn Tulun along with the mosques of Al-Azhar and Al-Hakim were the main Cairo mosques which had to accommodate all the faithful during Friday prayers.

The mosque has been reconstructed several times throughout its history. The first known reconstruction was carried out in 1177 by order of the Fatimid vizier Badr al-Jamali, who left a plaque with an inscription notable for containing a Shia version of the Shahada (“There is no God but Allah, Muhammad is the Messenger of Allah, Ali is the Vicar of Allah”). The mosque was rebuilt in 1296 by order of Sultan Lajin.

There is considerable disagreement about the date of construction of the minaret, whose feature is the external spiral staircase, similar to that of the famous minaret in Samarra. According to legend, Ibn Tulun himself was responsible for the design of the minaret. Many of the architectural features, however, point to later construction; in particular, the minaret is not fully connected to the main mosque building, which would not have happened if the mosque and the minaret had been built at the same time. Architectural historian Doris Behrens-Abuseif argues that Sultan Lajin, who rebuilt the mosque in 1296, was also the builder of the modern minaret.

During the medieval period, several buildings were erected against the outer walls of the mosque. Most were destroyed in 1928 by the Committee for the Preservation of Arab Monuments but two of the oldest and best preserved houses have remained intact. Beit al-Kritliya (“House of the Cretan Woman”) and Beit Amna bint Salim (“House of Amna, Salim’s Daughter”) were originally two separate buildings, but a bridge later crossed over to the fourth floor united them into one structure.