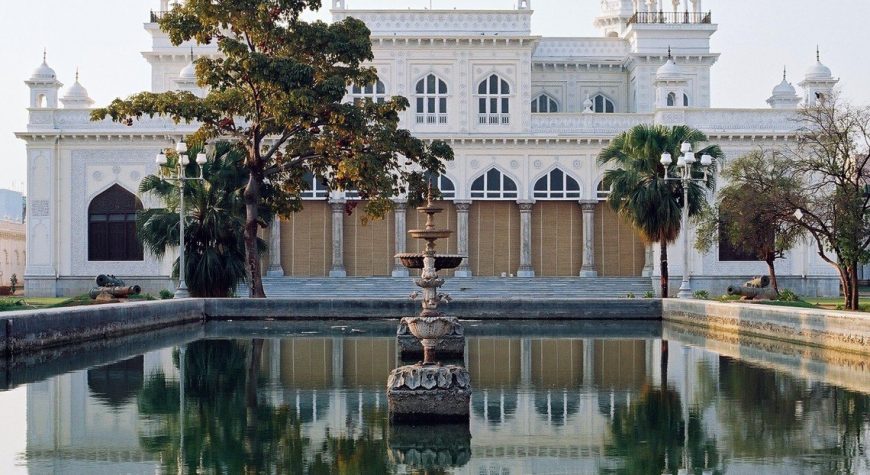 The Chowmahala Palace Complex, located in one of the most famous cities of India, Hyderabad, was the official residence of the Nizams (rulers) of the state of Hyderabad, which included the territories of the current states of Andhra Pradesh, Karnataka and Maharashtra. The nizam family of Hyderabad came from the Samarkand area, but came to India from Baghdad at the end of the 17th century. The representatives of the family were direct descendants of the first caliph of Islam, Abu Bakr. All the most important ceremonies and celebrations were held in this complex.

The construction of this architectural masterpiece began in 1750, when Salabat Jung was Nizam, but in time it was suspended. Construction work resumed more than a century later, in 1857 under the ruler Asaf Jah V, or as he is more commonly called Afzal al-Dawlah, and continued until his death in 1869. Originally the territory of the palace complex occupied 180 thousand sq. m. but in course of time this area decreased and today Choumakhala occupies only 57 thousand sq. m.

In translation from Persian the word “Choumakhala” means “four palaces”. Because of such a long period of creation, this opulent structure is a unique mixture of architectural styles and trends. There are two courtyards of enormous size: the southern and the northern, with gardens and fountains. The oldest part of the Chowmahal is the south courtyard, decorated in neoclassical style. The buildings that surround it are conventionally divided into four parts: Afzal Mahal, Mahtab Mahal, Takhniyat Mahal and Aftab Mahal.

See also  The exterior of the Bolo-Hauz Mosque

The northern courtyard was built later and housed the state ‘administration’. This part of the complex is designed in Islamic style with many domes, arches, and Persian ornaments. Also among the attractions of Chowmahal are the Clock Tower, the Hall of Councils, and the “heart” of the complex – Khilwat Mubarak, a huge hall for the most solemn ceremonies, decorated with 19 amazing chandeliers of Belgian crystal.