Arab Art in the Monuments of Cairo 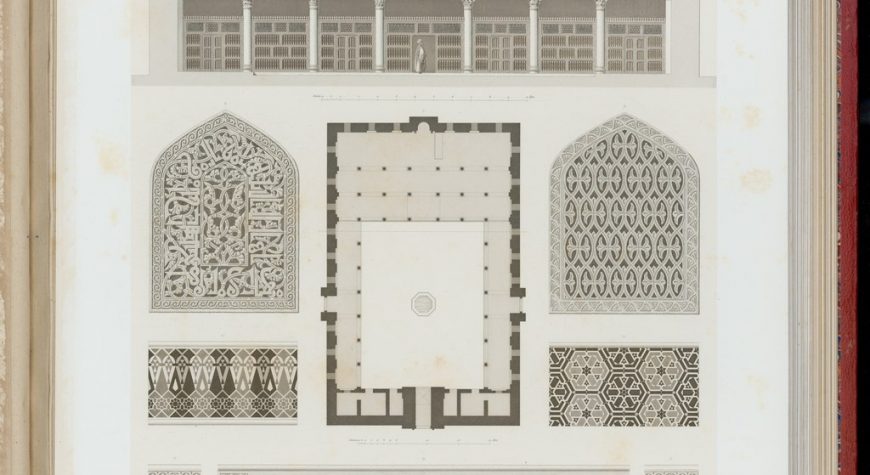 Arab Art in the Monuments of Cairo: From the Seventh to the End of the Eighteenth Century.

L’art arabe d’après les monuments du Cairo: depuis le VIIe siècle jusqu’à la fin du XVIIIe (Arabic Art in the Monuments of Cairo: from the Seventh to the End of the Eighteenth Century) is a vast, sumptuously designed work illustrating the richness of Islamic art and architecture as embodied in the appearance of streets, buildings, monuments, decorative arts, and books and manuscripts of the city of Cairo. The work was produced by Achille-Constantin-Théodore-Émile Priss d’Avenne, who is said to have personally supervised the printing of both this edition and his other masterpiece, a sumptuous atlas on ancient Egyptian art. The work contains 200 full-page illustrations in three volumes, each with its own table of contents. The drawings are accompanied by brief captions, but no explanatory text appears in the book. Most of the illustrations are in color lithography, a technique that was used in the 19th century to reproduce multicolor images.

Priss d’Avennes was born in France in 1807. He traveled extensively in Egypt and North Africa. The scholar is also known as Idris (or Edris) Efendi, after the name he took after his conversion to Islam. Priss d’Avennes was one of the first to make significant contributions to Egyptology and Orientalism in general, but much remains unknown in his biography. He lived a long and active life, during which he was a military instructor, irrigation engineer, fought in the Greek War of Independence in the 1920s, converted to Islam and served Egyptian rulers, and published academic journals and served on scientific societies. He received almost no recognition as the founding father of Egyptology, perhaps because he initiated the export of antiquities from Egypt to France.